Me, far right, with my late sister Tricia, my mum and my brother Andrew sat on our Jaguar high up Mastiles Lane in 1978

Me with my friends Hayley, Dave, Jane and Barney the dog a bit further down Mastiles Lane just a few months ago. I had no idea I’d been to the same spot 40 years earlier

L-R Dad, brother Andrew, late sister Tricia and myself on the Jaguar up Mastiles Lane in 1978 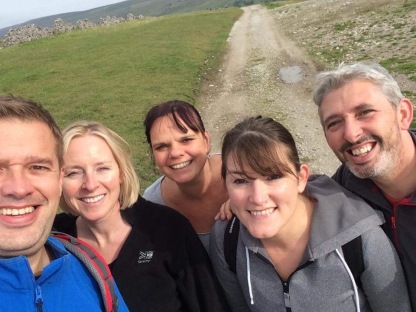 My friends (L-R) Stefan, Jane, Hayley and Dave with me on Mastiles Lane a few months ago

As I have remarked a number of times before, one of the loveliest things about using my dad’s archived columns from 40 years ago is when I come across a story that he relates about our family life back then. It stirs up and refreshes long-forgotten memories, or enlightens me about events that I have no memory of whatsoever.

It’s particularly thrilling when I can link what my dad is talking about to photographs I have seen in our family archives, and when they are pieced together, it adds a whole new layer of detail to an otherwise patchy recollection.

And so it has happened again this week when I read about a rather curious and adventurous family day out. Dad had decided to keep us entertained by using an old map for a trip up into the Dales, with our intended destination being Malham. All went well until we arrived in Kilnsey, famous for its annual show and impressive crag.

According to Dad’s old map there was a road that directly linked Kilnsey with Malham, but when we turned up the road, we found it was clearly rarely used. After a while, the road turned into cobbles, and as we passed the ‘Unsuitable for Motors’ sign, you’d have thought that perhaps we would have stopped and turned round.

But not my dad. For when he set his mind to something, he could be very determined indeed! What is even more astonishing about this unconventional detour is the fact that we were not driving any old car, but my dad’s pride and joy, his beautiful, sky blue classic 1968 Mark II Jaguar. And if you know anything about these cars, you will appreciate that they are very low slung, and so we bumped, scraped and jolted our way on up, high into the hills along what was no more than a rocky track.

It was only when the track actually disappeared into grass and mud that Dad did finally admit defeat and drew to a halt. But by then, we were so high up that the views were incredible, which of course made it entirely worth it, as Dad explains: “We concluded our journey in a field of cows high on the hills above Wharfedale with stirring views below and the Pennines all around.”

I do have vague memories now of that day, but because I was just 11 years old, I had no idea, and took no notice, of where we had ended up. But reading that column today, I discovered that it was in fact Mastiles Lane, an old drovers’ road that would have been been a busy thoroughfare in times gone by between Malham and Kilnsey.

When I read that, a little light went off in my head, as I knew I’d heard the name before. It turns out that I had recently walked that very same route without realising that I’d already been there, albeit in a Jaguar 40 years earlier!

My friends and I regularly walk near Kilnsey, and it’s a beautiful area to visit. So beautiful, in fact, that artist JMW Turner himself made sketches and drawings in and around the village during his 1816 tour of Yorkshire. His watercolour study ‘Kilnsey Crag and Conistone, Upper Wharfedale’ is now housed in Tate London, alongside books containing other sketches of the area, although sadly a full painting has never been discovered, so it’s unclear whether he did in fact complete one.

Unfortunately for Turner though, he didn’t enjoy the kind of dry, sunny weather that we have been experiencing. For him, it was unrelenting rain as a result of climatic disturbance caused by the eruption of Mount Tambora in the Philippines, which led to 1816 being dubbed ‘the year without summer’.

It must have made working rather difficult for him. Indeed some of his sketches and watercolours from that trip are visibly water-stained, and he wrote from Richmond on 31 July 1816 to his friend James Holworthy: “Weather miserably wet; I shall be web-footed like a drake.”

And then in a later letter, he recounts a dreadful journey: “…the passage out of Teesdale leaves everything far behind for difficulty – bogged most completely Horse and its Rider, and nine hours making eleven miles.”

Thankfully our own passage back out of the Dales in our Jag, although rather bumpy, was significantly quicker! (Source: Tate.org.uk)