This column appeared in the Darlington & Stockton Times  on 22nd August, & the Gazette & Herald on 20th August 2018) 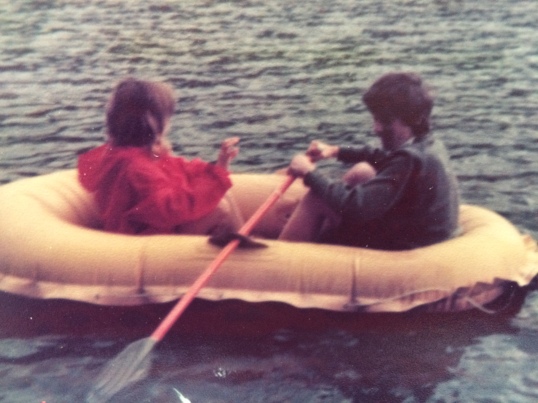 I’ve said before how my dad preferred to spend our family holidays in the UK, and reading his column from this week in 1978, he is talking about our annual week’s break in the Lake District. It means that already a full year has passed since I last wrote about our trips to the Lake District in this column. How time flies!

In sharp contrast to 2018, August 1978 it seems was not very dry at all, as Dad describes when mentioning a trip to Borrowdale, which he tells us was once said to be the wettest place in England. “It was to that district, however, that we journeyed on holiday during what must have been one of the wettest and most miserable Augusts in years.” Oh dear!

A quick search reveals that indeed, Borrowdale’s village of Seathwaite holds that distinctly soggy crown still, with the last annual rainfall having been recorded as 3552mm (the national average for 2017 was a mere 1372mm).

I do remember some very wet days, but also plenty of lovely dry ones too. On warmer days, we treated the shores of Lake Ullswater as you would a Mediterranean beach, but although us children loved it, that was one of the more popular places to go and so on fine days could be rather busy.

Dad hated busy places, and took the time to discover the quieter lakes that were less populous. A firm favourite was Brothers Water, which was a mere puddle compared to the likes of Ullswater and Lake Windermere, and as such significantly quieter. But we loved it there, and even on dodgy weather days could spend hours exploring its waters and shores. One year, we borrowed a little dinghy from a friend to take out. I wasn’t allowed to use it by myself to go very far, but my 16-year-old brother was considered mature enough to row us both across the lake all the way to the other side.

There is something dark and mysterious about the very centre of a deep lake. As we floated across, the water below us got blacker as it got deeper and my young self feared it might hide some mysterious relative of the Loch Ness Monster. I imagined it ominously observing our passage from the safety of the murky depths.

Thankfully, we made it there and back without becoming a lake-living leviathan’s lunch, but I’m glad that as a child I did not know the story of how Brothers Water got its name.

The lake was originally called Broad Water, but was changed to Brothers Water following an apparent tragedy in which two brothers are said to have drowned. There has been some debate as to whether this accident even occurred, but having delved deeper into the tale, it seems it does bear truth.

Many tellings and retellings of the story over the years have muddled timescales, facts and the names of the unfortunate victims, and for some time I was still none the wiser as to a definitive account.

However, I fortunately came across the blog of a chap called Raymond Greenhow who did a lot of research on this topic and, based on the evidence he found in archive newspapers and parish records, I think he has come up with the most likely and truest account. So I’ll summarise briefly what he believes happened.

A newspaper article dated 25th January 1786 stated that two brothers aged 16 and 19 had set out across the frozen lake one winter’s morning to visit a friend on the other side. Their father was working in nearby fields, and at the end of the day saw his sons start to make their way home. The father knew the ice had thawed somewhat during the day, and desperately tried to warn them. But sadly, they didn’t hear him, or misunderstood his signals and he was too far away to prevent them walking towards the centre of the lake. Under their weight, the ice fractured, and their father watched helplessly as his two sons fell through to their deaths.

Other sources suggest a separate earlier incident also involving two brothers, but it is less certain as to whether it happened or not. Nevertheless, the name was changed from Broad Water to Brothers Water as an everlasting memorial to those poor lost souls (Source: scafellhike.blogspot.com).