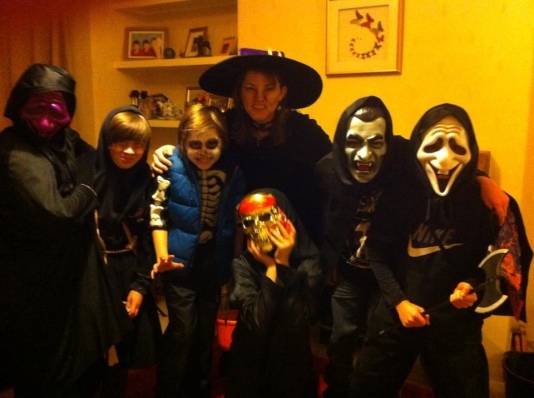 Witchy me with a posse of young ghouls in 2013

My three boys ready for Halloween in 2004

This week sees the twin celebrations of Halloween and Bonfire Night. I have many fond memories of dressing up and going out Trick or Treating with my young boys, although it might as well have just been called Treating, as the tradition of playing tricks on those who didn’t offer treats had pretty much died out.

I remember asking one of them if he knew why we said ‘Trick or Treat’. He didn’t, and when I explained, he was quite mystified as to why anyone would want to play tricks at all. As our neighbourhood was full of young families, we embraced 31st October with great enthusiasm, and many houses were elaborately decorated with the Halloween theme, while illuminated carved pumpkins were left outside to show us which houses would welcome the young trick or treaters.

As the children grew older and began going out alone, we made it very clear that they were not allowed to knock on the doors of houses that didn’t have any decorations or pumpkins outside, ensuring the residents were not disturbed. It’s worth taking a walk on Halloween evening just to see all the amazing elaborate carvings that people do these days. One of my neighbours used to carve intricate designs, and her house became a must-see destination. My friend Jane would turn her garage into a witches’ coven with smoke swirling outside, a hideous potion in a cauldron and gruesome challenges that the children would have to attempt before being rewarded with their treat. The children that were brave enough enter loved it.

On the subject of pumpkins, I hope today’s youngsters appreciate how lucky they are to not have to experience the sheer frustration of trying to carve a rock hard swede or turnip. Just scraping the insides out was exhausting, and I could not understand why I couldn’t achieve the same elegance and panache as those pumpkins I’d seen on TV. To be honest, I didn’t really know what a pumpkin was.

In my day, trick or treating was not very common, and unprepared householders had nothing but fruit or the odd biscuit in to give us. We were happy with whatever was handed out, but if they didn’t respond to our knocking, or had no treats, then the braver ones among us might play a trick, such as smear Vaseline on the doorknob or post leaves through the letterbox. It was harmless, although no doubt irritating for the residents.

Halloween is swiftly followed by Mischief Night, which is 4th November, and is not really marked any more. But in 1978, as my dad writes in his column of that date, the practice of playing pranks on Mischief Night was more popular than on Halloween.

“Gates will be taken off hinges, children will knock on doors and run away, slogans will be written on windows and walls, and other japes will take place,” he writes. He then goes on to talk about ‘unruly elements’ who spoiled the fun for everyone else by using the night as an excuse to inflict damage and vandalism on their neighbours. I’d heard of people putting fireworks through letterboxes and was so scared that every Mischief Night I’d make my dad tape our letterbox closed. He also used to put our absent front gate back on its hinges for the one night in the hope they would only take it off again, so deterring them from inflicting more annoying pranks, like daubing our windows with lard.

I think the event that caused the fear to become deeply ingrained happened when I was about four or five years old. At the time, we lived opposite a farm which had a large barn which was full of bales of straw for the winter. For some reason, on Mischief Night, someone decided to set fire to it. As it was bone dry, the whole lot quickly went up in flames. It was terrifying, and despite the fire engines rushing to put it out, the barn was completely destroyed.

There were mutterings the village about whether it was deliberate or not, but I don’t know if the culprit was ever caught or punished. But from that night on, every subsequent Mischief Night filled me with fear and dread.

So on Halloween night, when I see the flickering pumpkins and the happy groups of children dressed up in their spookiest best, I will not mourn the demise of Mischief Night one little bit.

A matter of fat

Going for a song

Not so fine and deodandy

Gone up in smoke

Enlightened by the storm gods

Get thee to Nunnington

The measure of things

Our own special day

A saint rushes in