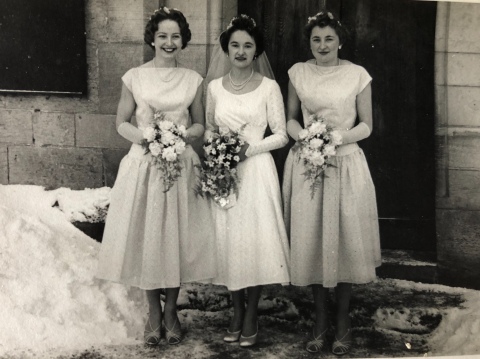 Mum on her wedding day on 10th January 1959 with her sisters Jennifer, left, and Margaret, right, who must have been shivering in their short-sleeved gowns 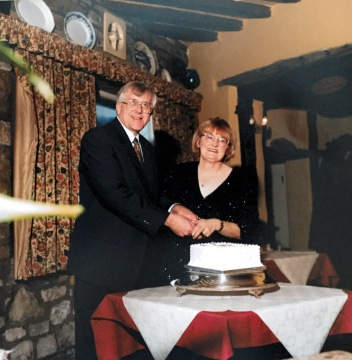 Mum and Dad would have been married for 60 years on 10th January. Here they are celebrating 40 years in 1999.

In my dad’s column from 13th January 1979, he mentions that it was his and my mum’s 20th wedding anniversary a few days before. He recalls the big day itself, 10th January 1959, at St Hedda’s Church in Egton Bridge on the North York Moors, and it had been snowing a blizzard the night before. Half of the guests couldn’t make it through, and those that did came by train, tractor or on foot. The registrar had to be dug out of a snowdrift, and the bride walked to the church in her fur boots. In the photographs of the time you can almost feel the bridesmaids shivering in their short-sleeved gowns.

Of course most of us know, and still mark, the big occasions of 30 (pearl), 40 (ruby), 50 (gold) and 60 (diamond) although what I didn’t know was that a diamond wedding anniversary used to be at 75 years rather than 60, but it changed around the time of Queen Victoria’s Diamond Jubilee which honoured her 60 years on the throne.

It strikes me though, that in the 1800s and earlier, there cannot have been many marriages of 75 years duration. The couple must have wed very young and both lived into their 90s, a considerable feat in an age where life expectancy was somewhat shorter, so that might be another reason why the milestone was moved 15 years closer.

As dad explains, 20 years was a ‘china’ wedding anniversary, and my parents bought a piece of porcelain to mark it. I don’t remember much of a celebration around that time, but I do remember mum and dad honouring their silver wedding anniversary five years later with a holiday to the island of Madeira. It was a big event for us as it took a lot of persuading to make Dad leave these shores for any length of time.

I was a bit confused by a list of traditional gifts that Dad included for each wedding anniversary because I thought that the first was ‘paper’. However Dad had ‘cotton’ at number one, and ‘paper’ at number two, and I thought he’d made a mistake. I looked at a number of UK wedding gift websites and they all put ‘paper’ for the first year. But when I dug a little deeper, I discovered that actually my dad hadn’t got it wrong after all. Having ‘paper’ first was a convention that, as often happens, came to us from America and has overtaken our original tradition.

During my digging, I also found a new modern list of gifts which someone saw fit to put together, which might have more to do with a more materialistic society than any meaningful symbolism. For example, to mark your fourth wedding anniversary, apparently it is now appropriate to offer ‘appliances’ as a gift.

I’m not sure if the man is expected to give his wife an appliance after four years, or whether it should be a purchase made together but, for the record, if any man thinks it is a good idea to buy me a washing machine to mark a romantic anniversary, then perhaps I could offer him a frontal lobotomy in return.

The modern list also suggests ‘diamond jewellery’ for 10 years, which to me seems to undermine the achievement of a 60-year marriage, another ‘diamond’ occasion. But then it might be a reflection of today’s world where more than 40% of marriages end in divorce, and around half of those are before 10 years. So in that case, maybe achieving a decade is worthy of diamonds.

I almost made it to 20 before mine unexpectedly hit the buffers, but in the traditional list, 19 doesn’t even get a mention. According to the modern list, however, we should have marked 19 years with something bronze. A sculpture perhaps? Looking back, I can think of several ways I may have put a bronze statue to good use when coming to terms with my failed marriage, so maybe it’s fortunate I didn’t get one.

Had Dad still been here, my parents would have been celebrating their 60th anniversary this week, and it’s possible that Mum would have received something with a diamond or two in it from him. Sadly, I can’t offer that on his behalf but I hope she won’t mind because, like most people’s mums, she is worth far more to me than all the diamonds in the world.