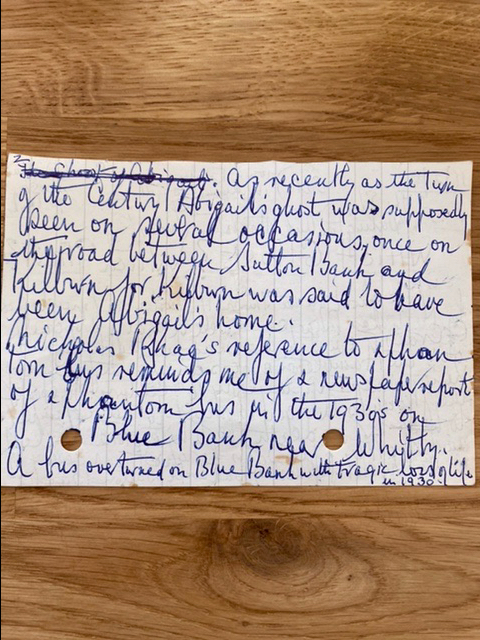 My column from three weeks ago about ghostly goings on at Sutton Bank resulted in some interesting feedback, with people coming forward with their own tales of spooky sightings.

Billy Goode, who lives not far from Sutton Bank, said that a family of five he knows, which included a doctor and a vet (in his words ‘really smart people’) were driving along the A170 when they passed a young woman in period dress near a bonfire. They turned to one another saying ‘Did you see that?’, but when they turned back to look, the girl and the fire had disappeared.

Another friend of mine (who I can report is also highly intelligent and of sound mind!) got in touch after reading the column saying: ‘A year or so back I saw a lady walking on the road near me dressed in black period costume. It was dark and my headlights showed her walking with her head down, in a black cloak and long black skirt and bonnet/hood. Very odd. I didn’t dare stop or look back! I have the shivers thinking about it now!’

So even if you’re a non-believer in ghosts, it’s hard to explain these strange sightings described by otherwise rational people, sometimes with several seeing the ‘ghost’ at the same time.

It seems Dad sparked a similar reaction from readers, as he tells us in his column of 1st March 1980. When he first wrote about a female ghost haunting the top of Sutton Bank a few weeks earlier, he didn’t mention the unfortunate ‘witch’, Abigail Glaister. I had discovered that fact as it was mentioned in his book, ‘Murders and Mysteries from the North York Moors’, which was published eight years later.

However, now that I’ve read his column from this week in 1980 (three weeks after he first mentioned the ghost), it transpires that it was a rather well known local character who suggested that it might be the spirit of the local witch. The letter came from Thirsk legend and amateur weather guru, Bill Foggitt, who said he believed the woman was the unfortunate Abigail.

After he had read Dad’s column of 9th February, Bill had written in, saying that he was very familiar with the rumours of a ghost at the famous beauty spot, and believed it to be a witch from nearby Kilburn who was hunted by hounds on the Hambleton moors in the 1600s. In order to escape them, she had leapt to her death from Whitestone Cliff and shortly afterwards, the first sighting of her ghost on the Thirsk-Helmsley road was reported. Regular of visions Abigail’s ghost continued down the years, and it seems persist even now.

The odd thing is, in this column from 1st March 1980, Dad names the woman as Abigail Craister, and yet in his book, she is named Abigail Glaister. Thanks to Dad’s habit of not throwing anything away, I found Bill’s original letter to check the spelling, and he definitely calls her ‘Craister’ (incidentally, the letter is sent on a scrap of paper that looks like it has been cut by hand from a used piece of foolscap, and every inch is taken up. Bill was clearly a very frugal Yorkshireman!).

I have found a few references elsewhere to both names, so I wonder if anyone knows which is correct, and where I might find other references to Abigail to find out a bit more about her?

Interestingly, Bill goes on to tell of another eerie story after he’d read Dad’s account of the ghostly No.7 bus said to haunt Ladbroke Road in London. Bill recalled a horrific bus crash in 1930 on Blue Bank in Sleights, near Whitby, which resulted in a terrible loss of life. Following that crash on what is now the A169, he claims the shadowy apparition of a bus began haunting the dangerously steep hill.

I’ve done a number of internet searches tying to find references to the crash, and to the phantom bus mentioned by Bill, but have come up empty handed. Next time I visit my mum, though, I’ll go and see if I can find any reference to the tale among the books in Dad’s library.

In the meantime, do any of you know about that crash, or can enlighten me about the tale of the bus that haunts Blue Bank?