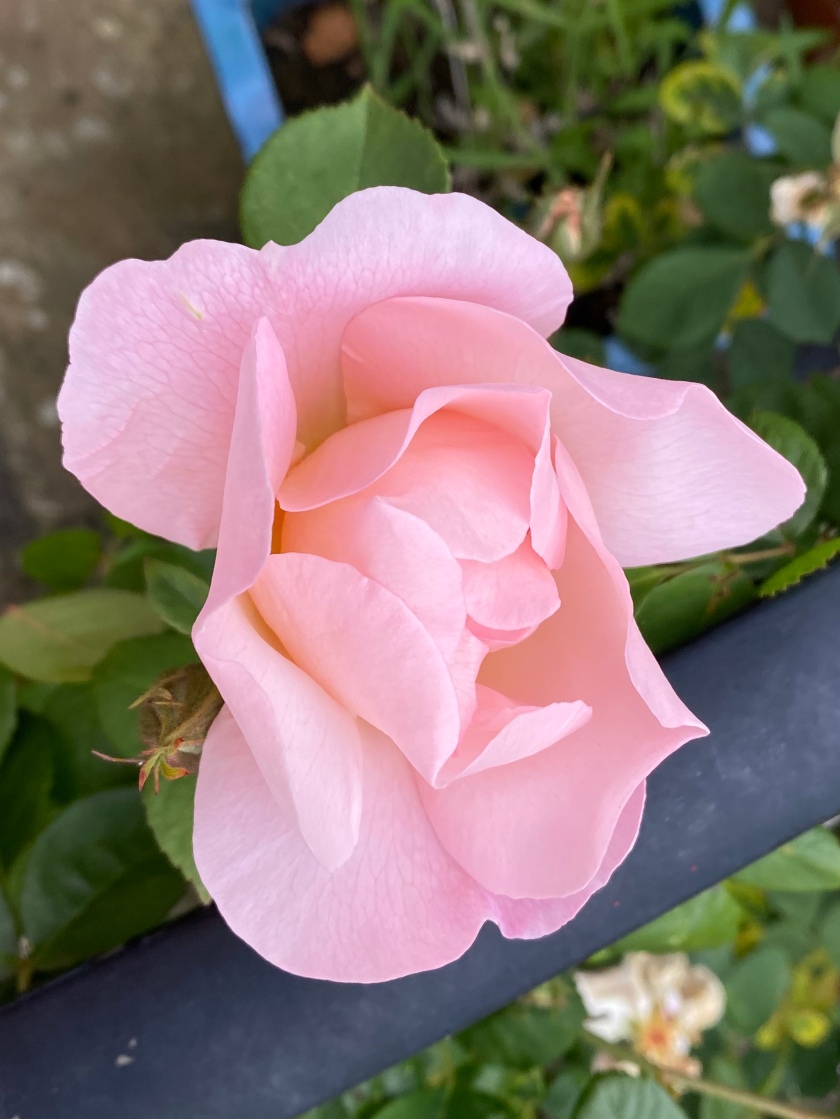 This year seems to be a very good one for roses. The ones in my mum’s garden are thriving, producing so many blooms that her flowerbeds, borders and patio are bursting with wonderful explosions of colour. I am not very knowledgeable when it comes to varieties, but the scented ones are especially lovely, filling the air with their glorious perfume as you walk past.

But when is a rose not a rose? When it is the Rose of Sharon, a name which is commonly associated with the hibiscus syriacus, a shrub from the mallow family. Trying to get to the bottom of why it is called ‘Rose of Sharon’ is nigh on impossible as there is a plethora of different plants with this name, including species of iris, peony, apple, and Chinese hibiscus, but no actual roses.

Unsurprisingly perhaps, the name has biblical associations, as my dad mentions in his column from 12th July 1980, appearing in the Old Testament (Song of Solomon): ‘I am the Rose of Sharon and the Lily of the Valleys’. There is debate to this day as to what the ‘Rose of Sharon’ actually was, and what the phrase really means. Floral contenders include the crocus, the tulip, the lily and the narcissus.

According to Dad, this flower of many identities is also known as St John’s Wort. He explains, though, that very few of his reference books mentioned Rose of Sharon in association with St John’s Wort and he had to refer back to the notes of his esteemed predecessor, Major Jack Fairfax-Blakeborough, to find one. Unfortunately, I wasn’t able to lay my hands on the notes Dad was referring to, although he does go on to say that the flower was one of the major’s favourites and he occasionally sported one in his buttonhole. I did eventually find out that it is mainly in Britain that St John’s Wort is sometimes known as Rose of Sharon, so I wonder if it is an old Yorkshire name? Perhaps one of you knows the answer, and can shed some light on why Rose of Sharon is linked to St John’s Wort.

St. John’s Wort can be seen both in gardens and growing wild, although it has to be treated with caution as it spreads very easily and can dominate other less robust plants. Common St John’s Wort has upright woody stems that grow up to a metre tall, with bright yellow star-shaped flowers speckled with black. It is also known as ‘perforate’ thanks to the fact that its narrow oval leaves are covered with translucent dots that can be seen when held up to the light making it look like it is covered in tiny perforations.

The plant has been associated with mystic qualities for centuries, not least because when its stems are broken, a blood-red substance seeps out. Some likened the tiny holes to the wounds on Christ’s hands and feet, and on the eve of St John the Baptist’s Day (24th June), the plant would be burned to ward off evil spirits and the charred herbs would then be hung in houses, stables, byres, or upon the necks of horses and dogs. One reference to the herb which dad found came from 1525 and states: ‘If it be putte in a mannes house there shall come no wyked spryte therein.’

I’ve recently rediscovered a small book written by Dad in 1995 called ‘Yorkshire Days’, a collection of notable dates celebrated within the county’s boundaries. It is St John’s Wort day on 29th August, the day when Roman Catholics commemorate John the Baptist’s death. You might be familiar with the story of Salome, King Herod’s step-daughter, who danced for him at a banquet and he was so enthralled that he granted her any wish. She asked for the head of John the Baptist to be served on a platter. Interestingly, John is one of only two saints (the other being the Virgin Mary) who have days to mark both their birth and their death. Most saint days occur on the date they died.

Although St John’s Wort can be poisonous to livestock, it has long been highly prized for its medicinal properties and, when applied in the right way, it has been shown to help heal wounds and burns, and ease the symptoms of insomnia, the menopause and depression.

Our own special day

A saint rushes in

St John and the rose

A tale of two elephants

Fancy a pootle, a potter, a bimble or a wander?

Is that a snake in the grass?