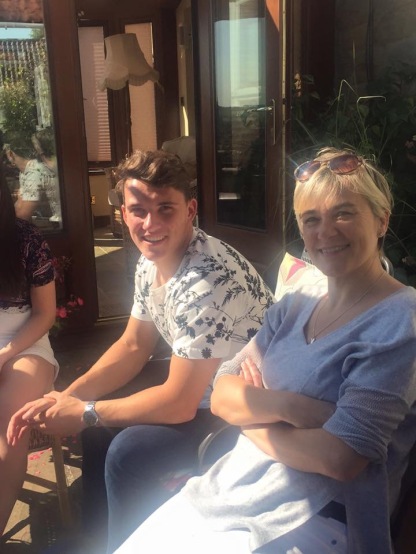 Tricia, with nephew Angus, wearing the grey jumper that I now wear and think of her. 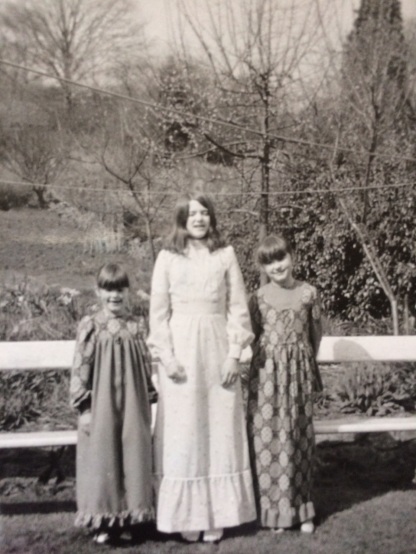 Me, Janet and Tricia in dresses made by my hard-working mum.

I have a favourite old grey jumper that I wear a lot. It is rather baggy, a bit worn with a hole in the sleeve. Some people point out the hole, and wonder why I choose to wear such a thing. But this jumper is rather special, as it belonged to my late sister and was one of her favourites.

After she died, we had the difficult but necessary task of clearing out her flat, and wondered what to do with all her things. The flat was only small and she had relatively few possessions, and yet there still seemed to be so much. Sorting through her clothes was especially poignant as we could remember the occasions she wore certain things, and knew the pieces she liked best. She had an abundance of scarves too and myself, my mum, my sister, her close friends, and her nieces were all able to choose one from the collection.

Every time I put on her jumper, or wear her scarf, I think of her, and sometimes I have sad thoughts, and other times, the memories are happy. But very personal keepsakes like this are a simple way of holding that person close, even though they are no longer with you.

In my dad’s column from 25th November 1978, he talks about old superstitions that were associated with the wearing of dead people’s clothes. There was a saying which, bearing in mind my special jumper, seems rather apt: “The clothes of the dead always wear full of holes.”

For some, the wearing of such clothes carried unwanted stigma, and they preferred to pass them on to the poor of the parish. There was an ancient belief that clothes once worn by the dead would soon perish, and therefore should not be kept. In Denmark, there was a stronger belief that if someone was buried in a living person’s clothing, then the living person’s health would deteriorate as the clothes rotted in the grave.

There are specific Yorkshire superstitions relating to clothing. For example, if a married woman’s apron fell off then it foretold that something annoying was going to happen to her. If an unmarried girl’s apron fell off, then that was a sign that she was thinking about her future sweetheart. Another one was that if a girl’s petticoat showed below her skirts, then it was a sign that her mother did not love her as much as her father. How bizarre, and one wonders how such a belief could possibly have come about!

In his column, Dad remarks: “I wonder if this has anything to do with the current fashion where petticoats deliberately peep below the hems of skirts?”

My dad wasn’t particularly known for his fashion expertise, and I don’t really recall a proliferation of peeping petticoats, although I do remember that for smart social occasions, dresses were full length, usually high-necked, and often with a large frilled hem around the bottom.

I was not a fan of skirts and dresses, and spent most of my days in trousers or shorts. If ever my mum wanted me to put a dress on, I would have a proper hissy fit. I recall having conversations with my best friend while watching Miss World on TV where we declared that if we ever entered that competition, we wouldn’t be seen dead in those dresses they wore. We would proudly wear our scruffy old jeans. I’m sure the judges would have seen past them to our natural beauty.

I was most disgruntled when, having been invited to a family friend’s daughter’s wedding, I was made to wear a full-length frock. To add insult to injury, we had to have our photograph taken in the back garden (see above). I wasn’t happy at all, and failed to appreciate that my mum had spent hours and hours making the dresses for us. In fact, in those days, she made many of our clothes and I used to think it was because she loved sewing. It was only later in life that I discovered she did it out of necessity because she and dad could not afford to buy us all new clothes.

So, apologies Mum, for being such a pain, and thank you for all your hard work at the sewing machine. I don’t know how you did it.