The ceremony marked 100 years since the Armistice 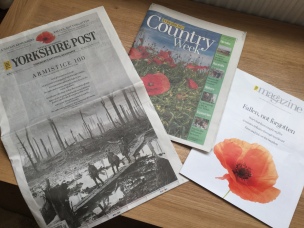 The arresting front cover of the Armistice weekend Yorkshire Post

The Festival of Remembrance was very moving

I’m writing this two weeks before you’ll read it and we’ve just had the commemorations for the 100th anniversary of the end of World War One. What an emotional time it has been, and I was pleased to see so many of our local communities put great thought and effort into their own ways of remembering the fallen.

Three things particularly stood out for me. The first was the arresting front cover of the Remembrance weekend Yorkshire Post, which forwent any news stories and instead had a full size black and white picture of soldiers amid the war-ravaged landscape of Passchendaele, alongside a special prayer from the Archbishop of York. One BBC reviewer stated that it ‘swept the board’ of the national front covers marking the Armistice. He also said: “Of all the regions of our great country, Yorkshire seems to pride itself on taking most pride in itself.” Yes, we certainly do.

The second thing was the TV coverage of the Festival of Remembrance from the Royal Albert Hall. I don’t often watch these kinds of events, and came across it while switching channels, and then couldn’t leave. The personal stories of people affected by war, past and present, were brought to life in such an engaging way, and I found the event extremely moving.

The third thing that stood out for me was the film ‘They Shall Not Grow Old’, directed by Peter Jackson, best known for the Lord of the Rings trilogy. Having spent many months trawling through century-old footage from the BBC and the Imperial War Museum, he compiled a mesmerising film that told the story of WWI based upon the voices of the people who were actually there. He used expert lip readers to analyse what those in the silent footage were saying, and then their words were brought to life by current serving soldiers. Using state-of-the-art technology, Jackson made the whole thing extremely vivid, and there is a jaw-dropping ‘wow’ moment early on in the film (which I won’t spoil for you), but from then on, my youngest son and I were transfixed. I would challenge anyone else to make the telling of the story of the Great War equally captivating for my generation and for that of my 16-year-old son.

Of course, while commemorating the Armistice and WWI, we also remembered those affected by the Second World War and other conflicts. As children, my parents lived through WWII and food rationing affected them for some time afterwards. In his column from 2nd December 1978 Dad explains that late November and early December used to be ‘pig killing time’ for rural folk, many of whom had raised their own pig in a sty in the back garden. Indeed, the old cottage in which I grew up had an ancient shed outside which I’m sure would have been used for keeping a pig or two in days gone by. A pig would be a good investment as the animal would provide food for the whole family all winter. But during the war, if you had a pig you had to register it and when it came to slaughter, you had give half of it towards the communal rationing supplies.

Groups of people were encouraged to set up ‘pig clubs’ where those that joined the club pitched in to raise the swine, and the community would support the effort by donating their kitchen scraps to feed them. Club members would then benefit from the produce once slaughter time came around, after the local authorities had received their share for rations of course.

It was hard graft butchering a pig and producing all the foodstuffs and very little went to waste. There’s an old Yorkshire saying that goes ‘There’s nowt wasted on a pig except it’s squeal.’ You had to make lard, pork chops, pork joints, bacon and black pudding and the bladder would be hung from sturdy hooks in the kitchen or pantry, alongside massive joints of ham. Our old kitchen used to have hooks in the ceiling beams which we believe were used for this purpose.

Dad also mentions “scrappings made so crisp and tasty with salt”. I presume these were what I would know as ‘pork scratchings’, one of my guilty pleasures today. Have any readers raised their own and pig and made their own pork scrappings, I wonder?