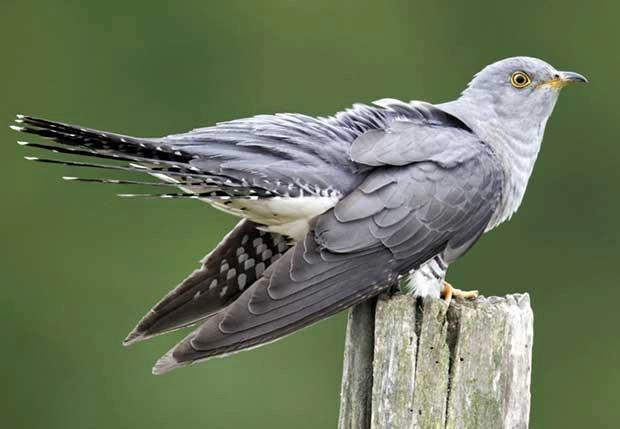 As I write this column (about 2 weeks before you will read it) I’m disappointed to have to report that I am yet to hear the uplifting sound of a cuckoo’s call. It is one of those quintessentially British sounds of the countryside that heralds the firm arrival of warmer weather and brings to mind things like afternoon tea, country fairs and cricket on the village green.

But, as my dad says in his column from 13th May 1978, it is a bit of a mystery a to why we associate this bird so firmly with our shores, as it is not a native, but merely an annual visitor who chooses to come here for the summer to breed when its own home in Africa proves too hot to bear.

The cuckoo is a bit like the school bully of the avian world. They pick on small defenceless little birds, like the dunnock or meadow pipit, and when they are not looking, hoick an egg out of the unwitting little birds’ nests and lay their own in its place. After about 12 days, the young cuckoo hatches, and immediately displays its bullying nature by chucking all the other chicks out so that it can have all the food to itself.

When all is said and done, the dunnocks and pipits must be a bit dim not to notice that their cute little fledglings have vanished and been replaced by a ravenous monster that looks nothing like them. But no, they keep on feeding the imposter until they are dwarfed by it, at which point it flies off without a backward glance or even a thank you. Unbelievable.

Cuckoos have always been notoriously difficult to spot, and even more so today, as they sadly find themselves on the RSPB’s Birds of Conservation Concern Red List, along with 66 other species. They have halved in number over the past 20 years, with an estimate of 15,000 breeding pairs due here this year.

One in four UK birds are of conservation concern and need some form of action to halt and turn around their decline. In 2015, there were a startling 20 new species added to the red list, which sees many familiar names under threat, such as the herring gull, kittiwake, nightingale, hawfinch, yellowhammer, house sparrow, tree sparrow, starling and song thrush to name just a few. Even more worrying is that some, such as the puffin, turtle dove, pochard and Slavonian grebe, are facing global extinction.

Like I mentioned last week when talking about butterflies, there are things you can do to help, such as to support the RSPB’s and other bird charities’ fundraising and conservation efforts, which are already seeing some successes. Bitterns were considered extinct by the 1870s, and yet now, their population is at the highest it has been for 200 years. Similarly the avocet disappeared from the UK in the 19th century, only to make a tentative return in the 1940s, and now, in a large part thanks to the RSPB and other conservation efforts restoring and preserving their natural habitats, their numbers are healthy again.

The first written use of the term is recorded in a 12th or 13th century satirical poem called The Owl and the Nightingale (author unknown), and then it was used again by Geoffrey Chaucer in The Miller’s Tale in the late 14th century. Shakespeare was also very fond of it, and a good number of his characters were either unwitting cuckolds, or (rightly or wrongly) suspected their wives to have cuckolded them.

These days it also has the unfortunate fame of being a term in common usage in certain fields of pornography, a fact I only discovered by accident when researching this column. I won’t enlighten you on what eyebrow-raising websites I stumbled upon (albeit only on a Google search results list!), but needless to say, I swiftly changed my search criteria! 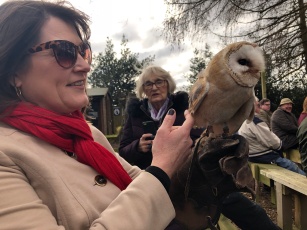 Me with a barn owl at York Bird of Prey Centre

My brother Andrew with a tawny owl 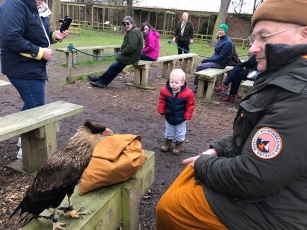 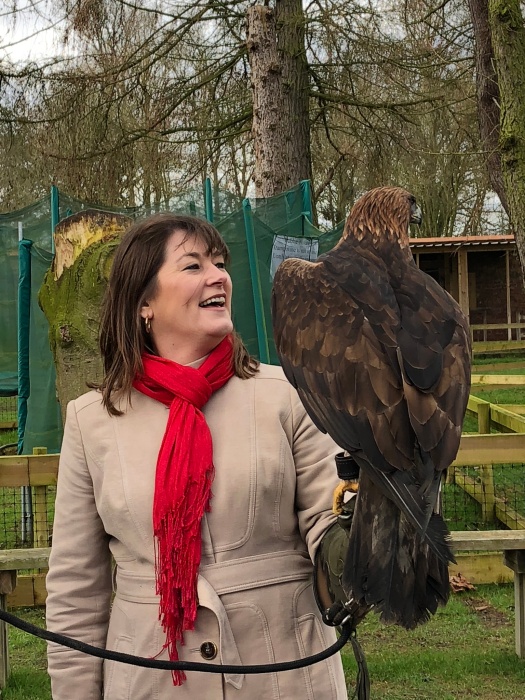 Me with a majestic golden eagle 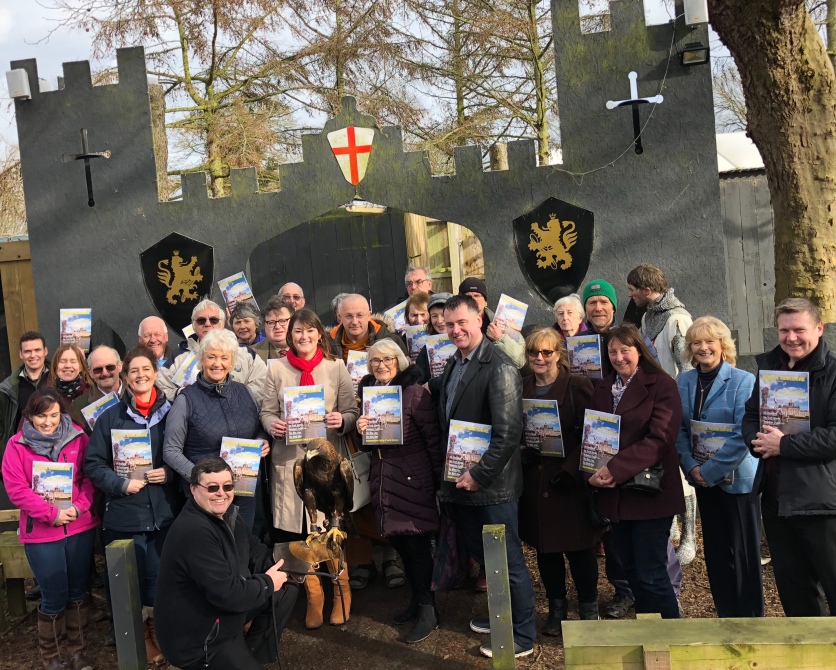 I was very fortunate to be invited to the York Bird of Prey Centre in Huby for the launch of the Tourism Association of North Yorkshire (TANY) 2018 visitor guide. TANY is a small, independent organisation that relies on volunteers, and does sterling work in promoting our region, especially Ryedale, Hambleton and the North York Moors, to support local businesses in attracting valuable tourists to our beautiful part of the world.

I’d contributed an article about my dad, which is why I was asked along. What I didn’t expect was to be able to sit among the birds as they flew freely around us, tempted by morsels of meat placed in certain spots. We were invited to handle the birds ourselves, and I got up close and personal with a stunning barn owl, a southern crested caracara (a type of falcon), a sweet tawny owl and a majestic golden eagle. We were taught about the valuable education and conservation work the centre does, and learned that the birds get hours of free flying time outside of their aviaries every day (I must admit, I was wondering about that!).

It’s a rare privilege to be able to get so close, and really made me appreciate just how amazing these birds of prey are. My parents were both (and my mum still is) keen bird watchers, and had installed several nesting boxes and feeders in their garden, keeping binoculars by the window so they could observe the daily antics of their feathered friends. They were both very knowledgeable and could instantly identify most birds that visited.

I can’t remember them ever mentioning a white blackbird though. In fact, until this week when I read my dad’s column from 25th March 1978, I had no idea they even existed. But apparently so, as a reader had written to ask Dad if white blackbirds were rare. Dad remembered having seen one in the grounds of the Bowes Museum in Barnard Castle. I assumed this would have been some kind of albino, but not necessarily, as, with help from the RSPB, I’ve discovered that some birds are simply lacking in the pigment that colours the feathers.

Further research revealed that the colouring of birds is in fact quite complicated, and just because a bird appears to be iridescent blue or green in colour does not mean they have blue or green feathers. In fact, the colour is created by the light being reflected off the complex structure of the feathers, making them appear blue or green. These are known as ‘structural’ colours. The true colour of many iridescent feathers is actually brown. So, for example, if you see a kingfisher in low light, it will often appear dark in colour. Blacks, browns, chestnut-reds and yellows are created by melanin, a pigment which does colour the actual feather and also influences the intensity of the hue. Other colours are created by the process of the underlying pigment combining with a structural colour. For example some parrots have an underlying pigment of yellow that interacts with a blue structural colour, which then makes the parrot appear green.

Anyway, back to our unusual white blackbird. Occasionally, the normal process that produces a bird’s colour breaks down, which can result in no pigmentation, or patchy pigmentation. A brief search on the Internet throws up pictures of all sorts of wonderful patterns on the blackbird’s feathers, from pure white, to black with a white head, collar, breast or tail, white with black spots, black with white spots, or even black with white ‘go-faster’ stripes down the side.

Often the captions on these pictures mistakenly describes them as ‘albino’ or ‘part-albino’. As far as I am aware, it is impossible to be ‘part-albino’. All vertebrates can be affected by albinism, which is a genetic mutation leading to reduced or complete absence of the pigment melanin which is responsible for colouring skin, hair, eyes, fur and feathers. The difference between a white blackbird and an albino blackbird is that albinos have pink or red eyes rather than black, because the lack of pigmentation means the blood can be seen. They will also have pale skin, legs, feet and beaks.

I saw recently wildlife artist and fellow columnist Robert Fuller’s wonderful video of the white stoat in his garden. I’d love to find out if readers have spotted any other unexpectedly white creatures in their gardens, or out and about. Sadly, I have yet to clap my eyes on the elusive white blackbird.